What is Celiac Disease and Gluten Sensitivity

Celiac disease tends to cluster in families. Parents, siblings, or children (first-degree relatives) of people with celiac disease have between a 4 and 15 percent chance of developing the disorder. However, the inheritance pattern is unknown.nThe risk of developing celiac disease is increased by certain variants of the HLA-DQA1 and HLA-DQB1 genes.

The HLA-DQA1 and HLA-DQB1 GENES

HLA-DQ (DQ) is a cell surface receptor protein found on antigen presenting cells. It is an αβ heterodimer of type MHC class II. The α and β chains are encoded by two loci, HLA-DQA1 and HLA-DQB1, that. are adjacent to each other on chromosome band 6p21.3. Both α-chain and β-chain vary greatly. A person often produces two α-chain and two β-chain variants and thus 4 isoforms of DQ.

The HLA-DQA1 gene provides instructions for making a protein that plays a critical role in the immune system. The HLA-DQA1 gene is part of a family of genes called the human leukocyte antigen (HLA) complex. The protein produced from the HLA-DQA1 gene attaches (binds) to the protein produced from another MHC class II gene, HLA-DQB1. Together, they form a functional protein complex called an antigen-binding DQαβ heterodimer. This complex displays foreign peptides to the immune system to trigger the body's immune response.The HLA complex helps the immune system distinguish the body's own proteins from proteins made by foreign invaders such as viruses and bacteria. 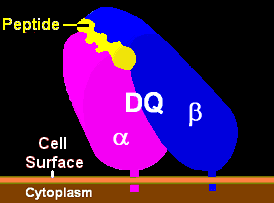 Almost all people with celiac disease have specific variants of the HLA-DQA1 and HLA-DQB1 genes, which seem to increase the risk of an inappropriate immune response to gliadin. However, these variants are also found in 30 percent of the general population, and only 3 percent of individuals with the gene variants develop celiac disease.

It appears likely that other contributors, such as environmental factors and changes in other genes, also influence the development of this complex disorder.

"The MHC, also known in humans as the human leukocyte antigen (HLA) region, encompasses 7.6Mb on chromosome 6p21 and is the most gene dense region within the human genome encoding 252 expressed loci including several key immune response genes. The region can be subdivided into the extended class I, classical class I, classical class III, classical class II and extended class II regions and contains the largest degree of polymorphism within the genome. Most notably, the genes coding for the Major Histocompatibility Complex (MHC) are in fact the most polymorphic genes known. In fact there are more than 800 different alleles of human MHC class I and II genes. (See Reference 1 for more details)

Below image: The HLA (Human Leukocyte Antigen) region on Chromosome 6 - image from Wikipedia

The large extent of variability in HLA genes poses significant challenges in investigating the role of HLA genetic variations in diseases. Disease association studies typically treat each HLA allele as a single complete unit. Each MHC class II gene has many possible variations, allowing the immune system to react to a wide range of foreign invaders. Researchers have identified hundreds of different versions (alleles) of the HLA-DQA1 gene, each of which is given a particular number (such as HLA-DQA1*05:01).

While the human body has many HLA molecules, the only ones that can bind onto gluten tightly enough to get the immune system excited are DQ2 and DQ8.

Testing negative for the genes rules out celiac disease in virtually all cases, but testing positive does not mean you have celiac disease. A trigger is still needed to activate the disease in your body.

"Approximately 95% of CD patients express HLA-DQ2, and the remaining patients are usually HLA-DQ8 positive. However, the HLA-DQ2 allele is common and is carried by approximately 30% of Caucasian individuals. Thus, HLA-DQ2 or HLA-DQ8 is necessary for disease development but is not sufficient for disease development; its estimated risk effect is only 36-53%.
The majority of patients with CD have been found to carry the HLA DQA1*05 and DQB1*02 alleles, which encode the DQ2.5 molecule, and the expression of DQ2.5 genes is an important risk factor in CD. The DQ2.5 genes establish the different intensities of anti-gluten immunity, depending on whether they are in a homozygous or a heterozygous configuration. " (See Reference 2)

New alleles being located for Celiac Disease - See Reference 3 below

Abstract: "We densely genotyped, using 1000 Genomes Project pilot CEU and additional re-sequencing study variants, 183 reported immune-mediated disease non-HLA risk loci in 12,041 celiac disease cases and 12,228 controls. We identified 13 new celiac disease risk loci at genome wide significance, bringing the total number of known loci (including HLA) to 40. Multiple independent association signals are found at over a third of these loci, attributable to a combination of common, low frequency, and rare genetic variants. In comparison with previously available data such as HapMap3, our dense genotyping in a large sample size provided increased resolution of the pattern of linkage disequilibrium, and suggested localization of many signals to finer scale regions. In particular, 29 of 54 fine-mapped signals appeared localized to specific single genes - and in some instances to gene regulatory elements. We define a complex genetic architecture of risk regions, and refine risk signals, providing a next step towards elucidating causal disease mechanisms." (see full article - Reference 3)

HLA genes represent the main risk factor in autoimmune disorders. In celiac disease (CD), the great majority of patients carry the HLA DQA1*05 and DQB1*02 alleles, both of which encode the DQ2.5 molecule. The formation of complexes between DQ2.5 and gluten peptides on antigen-presenting cells (APCs) is necessary to activate pathogenic CD4(+) T lymphocytes. It is widely accepted that the DQ2.5 genes establish the different intensities of anti-gluten immunity, depending whether they are in a homozygous (2 copies of same allele) or a heterozygous configuration.

1- The HLA Region and Autoimmune Disease: Associations and Mechanisms of Action

What is Gluten and how to identify it? What is the molecular structure of gluten?

Gluten is a protein found in wheat. What part of the wheat grain is it located? How can you identify foods that contain gluten? ... read more.

What are the genes in the Human Genome responsible for Celiac Disease?

There are two genes that are responsible for Celiac disease although other genes and environmental factors play a role in those that get the disease, since as many as 30-40% of the population may have the gene(s) but not show symptoms... read more.

Why is an immune response triggered against gluten in some individuals?

How does gluten cause celiac disease?... read more

What is the difference between celiac disease and gluten sensitivity?

Only 1% percent of the population has true Celiac disease. Many more have what is know as gluten sensitivity What is the difference between the two, and how to know which one you have... read more. Is gluten the only substance in wheat people are sensitive to? ... read more.

What are the ongoing Clinical Trials for Celiac Disease

There is still a lot that is not understood about how gluten's affect humans... many clinical trials are underway... read more

What are lectins -why are they toxic and cause illness?

Both plants and animals contain lectins. What are they and why can they be very toxic to our bodies. Why do beans have to be soaked and properly cooked? What is the role of lectins in autoimmune disease? ...read more

Role of Lectins in Inflammation

Although gluten has been in the limelight for sometime, many people may not realize that other lectins may be causing digestive issues... read more

How to Enhance Flavor in Cooking 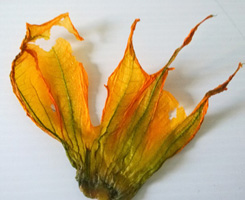 Flavor can be enhanced many ways... Umami is now the commonly used term by taste scientists for the fifth taste but brining, curing and dehydrating are also very effective methods.