What are electromagnetic waves?

An electromagnetic wave consists of an electric field and a magnetic field at right angles to each other and to the direction of the motion of the wave.

Because the electric and magnetic fields are at right angles to the direction of the wave, the electromagnetic wave is a transverse wave.

Electromagnetic radiation is classified into types according to the frequency of the wave: these types include, in order of increasing frequency, radio waves, microwaves, terahertz radiation, infrared radiation, visible light, ultraviolet radiation, X-rays and gamma rays.

Is light a particle or wave?

Light has both wave and particle properties. This is also the case for all matter. Electromagnetic radiation can be considered to consist of particle-like packets of wave-energy called photons. These massless particles travel at the speed of light (300,000 kilometers per second in a vacuum).

Every photon is characterized by wavelength (the distance from the crest of one wave to the crest of the next wave), by frequency (the number of wave cycles that pass by in a given period, measured in Hertz, which stands for cycles per second), and by the energy it carries (measured in electron volts).

What is the relationship between wavelength, frequency and energy of Electromagnetic Radiation?

How are electromagnetic waves produced?

The source of all electromagnetic waves is charge that is changing speed or direction. 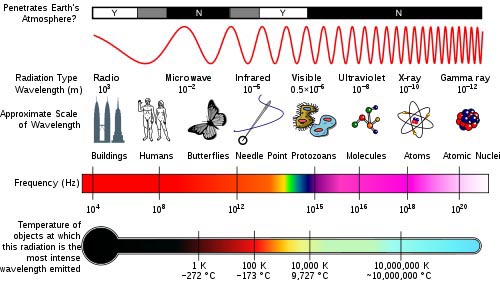 The visible spectrum is the portion of the electromagnetic spectrum that is visible to (can be detected by) the human eye. Electromagnetic radiation in this range of wavelengths is called visible light or simply light.

Remember the visible spectrum as-- ROYGBIV

What are the different types of Electromagnetic Waves?

Infrared ---lies between the visible and microwave portions of the electromagnetic spectrum. Shorter, near infrared waves are not hot at all - in fact you cannot even feel them. These shorter wavelengths are the ones used by your TV's remote control. Far infrared waves we experience every day in the form of heat. The heat that we feel from sunlight, a fire, a radiator or a warm sidewalk is infrared.

Visible-- waves are the only electromagnetic waves we can see. We see these waves as the colors of the rainbow. Each color has a different wavelength. Red has the longest wavelength and violet has the shortest wavelength. When all the waves are seen together, they make white light.

Ultraviolet (UV) light-- is electromagnetic radiation with a wavelength shorter than that of visible light, but longer than X-rays, in the range 10 nm to 400 . Though these waves are invisible to the human eye, some insects, like bumblebees, can see them. It is ultraviolet waves that are responsible for causing our sunburns. UV light cannot pass through glass unless it is made of quartz.

X- Rays -- have smaller wavelengths and therefore higher energy than ultraviolet waves. We usually talk about X-rays in terms of their energy rather than wavelength. X-rays are most known for their use in medicine. Because your bones and teeth are dense and absorb more X-rays then your skin does, images of your bones or teeth are left on the X-ray film while your skin appears transparent.

Gamma Rays -- have the smallest wavelengths and the most energy of any other wave in the electromagnetic spectrum. These waves are generated by radioactive atoms and in nuclear explosions. Gamma-rays can kill living cells, a fact which medicine uses to its advantage, using gamma-rays to kill cancerous cells.

What is the difference between longitudinal and transverse waves:  This page contains videos explaining the different waves including Rayleigh Waves and Love Waves.