How big is the planet?

Comparison of the size of Mars and the Earth

Panorama from the Mars Rover "Spirit"

The surface of Mars is dry and dusty. The highlands of the southern hemisphere have more craters than the lower areas in the northern hemisphere. One of the craters is the huge Hellas Planitia. It is 2100 km across. 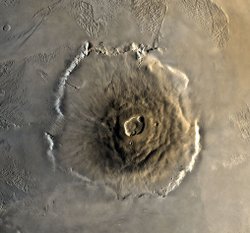 There is an area called the Tharsis Bulge that has four huge volcanoes. These volcanoes have not erupted for millions of years. The largest one is Olympus Mons. It is 27 km tall, making it the highest mountain in the Solar System and much higher than Mount Everest on Earth. It is 540 km across, making it too big to see the whole thing from the surface of Mars.

Mars has a huge canyon called Valles Marineris that is much bigger than the Grand Canyon on Earth. It is 4000 km long, up to 7 km deep and up to 200 km wide. It is thought that Valles Marineris was made when the surface cracked when the Tharsis Bulge formed.

There are also two ice caps at the poles. They are made of carbon dioxide and water ices. The northern one is large and the southern one is small.

In some places, there are channels that look like they were made by water erosion. Mars may have once been a wet planet like Earth.

If you got in a spaceship and landed on the surface of Mars, you would notice that there is air and an atmosphere, but it is very thin. When you are standing at the bottom of Valles Marineris, there is almost the same air pressure as you would find on the top of the tallest mountain on Earth, Mount Everest. Even then, you would not want to breathe it because it has very little oxygen, and much more carbon dioxide than on the Earth. Carbon dioxide is the gas that you send out from your lungs when you are breathing. Even with these problems, someday people will travel to Mars and walk on its surface. 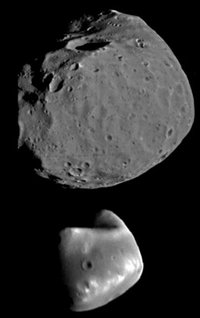 The Moons of Mars

It is believed that these moons did not originally orbit Mars, but were instead a part of the Asteroid belt. When these pieces of the Solar System came close to Mars, they were captured by the gravity of Mars and went into relatively stable orbits around Mars. Like the Earth's moon, these moons are in a tidal lock, always keeping the same face towards Mars while they are in orbit.

Deimos means "panic" or "dread" as the son of Mars. Deimos is one of the smallest moons of any planet in the Solar System currently known.

How long is a day on this planet?

What is it made of?

It is thought that Mars has an iron core with some sulfur and a mantle and crust made of silicate.

How much would Mars's gravity pull on me?

If you were on Mars, it would pull you down with a force about two fifths as strong as the force of Earth's gravity. You could lift objects that weigh almost three times as much compared to similar objects here on the Earth. You could jump up almost three times higher, and it would take much longer to fall to the ground from the same height.

Even though it looks as though you would be like a comic-book hero on Mars, you would still have to worry about the mass of an object. A large object that is moving forward would still crush you if you got in its way, just like it would be a problem here on the Earth, and a bullet from a gun would do just as much damage on Mars as it does on the Earth. A vehicle that travels on the surface of Mars would have the same problems trying to stop as it would on the Earth, but an interesting problem would be that because of the reduced gravity a vehicle would not "grip" the ground on Mars as strongly, making it harder to stop if you are traveling at a high speed

TEST YOUR KNOWLEDGE OF THE MATERIAL