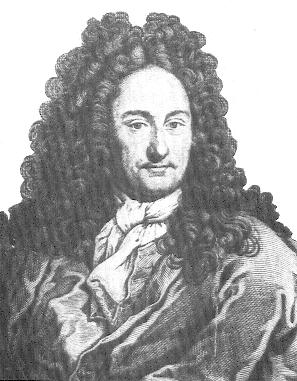 Gottfried Wilhelm von Leibniz (July 1, 1646 in Leipzig - November 14, 1716 in Hannover) was a German philosopher, scientist, mathematician, diplomat, librarian, and lawyer of Sorb descent. Leibniz is credited with the term "function" (1694), which he used to describe a quantity related to a curve; such as a curve's slope or a specific point of said curve. Leibniz is generally, with Newton, jointly credited for the development of modern calculus; in particular, for his development of the integral and the Product rule.

He was born in Leipzig. He was a highly intelligent youth who entered Leipzig University at age 15. He graduated from there with a bachelor's degree in philosophy at 17 and with a doctorate in law at 20.

Leibniz constructed the first mechanical calculator capable of multiplication and division. He also developed the modern form of the binary numeral system, used in digital computers. Some have speculated that it may be interesting to consider what might have resulted from Leibniz combining his findings in binary arithmetic with those developments he made in mechanical calculation.

Although there is some question of original authorship, Leibniz is credited along with Isaac Newton with inventing the infinitesimal calculus in the 1670s. According to his notes, a critical breakthrough in his work here occurred on November 11, 1675, when he demonstrated integral calculus for the first time to find the area under the y=x function. He introduced several notations used in calculus to this day, for instance the integral sign "+ representing an elongated S from the Latin word summa and the d used for differentials from the Latin word differentia.

Leibniz thought symbols to be very important for the understanding of things. He also tried to develop an alphabet of human thought, in which he tried to represent all fundamental concepts using symbols and combined these symbols to represent more complex thoughts. Leibniz never finished this.

His philosophical contribution to metaphysics is based on the Monadology, which introduces Monads as "substantial forms of being", which are akin to spiritual atoms, eternal, indecomposable, individual, following their own laws, not interacting ("windowless") but each reflecting the whole universe in pre-established harmony. In the way sketched above the notion of a monad solves the problem of the interaction of mind and matter that arises in René Descartes' system, as well as the individuation that seems problematic in Baruch Spinoza's system, which represents individual creatures as mere accidental modifications of the one and only substance.

The Theodicee tries to justify the apparent imperfections of the world by claiming that it is optimal among all possible worlds. It must be the best possible and most balanced world, because it was created by a perfect God.

Leibniz is believed to be the first person to suggest that the concept of feedback was useful for explaining many phenomena in many different fields of study.

The principles of the logic of Leibniz, and consequently of his whole philosophy, reduce to two:

With regard to the first principle, the number of simple ideas is much greater than Leibniz thought; and, with regard to the second principle, logic considers three operations -- which are now known as logical multiplication, logical addition, and negation -- instead of only one.

Characters were, with Leibniz any written signs, and "real" characters were those which -- as in the Chinese ideography -- represent ideas directly, and not the words for them. Among real characters, some simply serve to represent ideas, and some serve for reasoning. Egyptian and Chinese hieroglyphics and the symbols of astronomers and chemists belong to the first category, but Leibniz declared them to be imperfect, and desired the second category of characters for what he called his universal characteristic. It was not in the form of an algebra that Leibniz first conceived his characteristic, probably because he was then a novice in mathematics, but in the form of a universal language or script. It was in 1676 that he first dreamed of a kind of algebra of thought, and it was the algebraic notation which then served as model for the characteristic.

Leibniz attached so much importance to the invention of proper symbols that he attributed to this alone the whole of his discoveries in mathematics. And, in fact, his infinitesimal calculus affords a most brilliant example of the importance of, and Leibniz's skill in devising, a suitable notation.

What is usually understood by the name "symbolic logic", is what Leibniz called a Calculus ratiocinator and is only a part of the Universal Characteristic. In symbolic logic Leibniz enunciated the principal properties of what we now call logical multiplication, addition, negation, identity, class-inclusion, and the null-class; but the aim of Leibniz's researches was, as he said, to create "a kind of general system of notation in which all the truths of reason should be reduced to a calculus. This could be, at the same time, a kind of universal written language, very different from all those which have been projected hitherto; for the characters and even the words would direct the reason, and the errors -- excepting those of fact -- would only be errors of calculation. It would be very difficult to invent this language or characteristic, but very easy to learn it without any dictionaries". He fixed the time necessary to form it: "I think that some chosen men could finish the matter within five years"; and finally remarked: "And so I repeat, what I have often said, that a man who is neither a prophet nor a prince can never undertake any thing more conducive to the good of the human race and the glory of God".

In his last letters he remarked: "If I had been less busy, or if I were younger or helped by well-intentioned young people, I would have hoped to have evolved a characteristic of this kind"; and: "I have spoken of my general characteristic to the Marquis de l'Hôpital and others; but they paid no more attention than if I had been telling them a dream. It would be necessary to support it by some obvious use; but, for this purpose, it would be necessary to construct a part at least of my characteristic; -- and this is not easy, above all to one situated as I am".

Leibniz thus formed projects of both what he called a characteristica universalis, and what he called a calculus ratiocinator it is not hard to see that these projects are interconnected, since a perfect universal characteristic would comprise, it seems, a logical calculus. Leibniz did not publish the incomplete results which he had obtained, and consequently his ideas had no continuators, with the exception of Lambert and some others, up to the time when Boole, De Morgan, Schröder, MacColl, and others rediscovered his theorems. Frege remarked that his own symbolism is meant to be a calculus ratiocinator as well as a lingua characteristica.

All text is available under the terms of the GNU Free Documentation License (see Copyrights for details). Disclaimers. Wikipedia is powered by MediaWiki, an open source wiki engine.