Coal fired ovens (below) can only to had by inheriting in NYC restaurants. They produce a thinner crispier pizza than when cooked in a wood oven.

Both oven and pizza from Luzzo's on 1st Avenue.

What is a Coal Fired Oven -- .Coal-burning ovens are hot commodities for pizza makers since the only way to get one in New York City is to inherit it. Coal fired ovens have a long history to pizza making in the US. New York City was the birth place of New York style pizza. Lombardi's which opened in 1905 was the first pizzeria in the United States, and it happened to use a coal-fired oven.

One of the main differences between coal and wood comes not from the coal smoke but by the intense heat a coal fire generates. Coal provides about 13,000 BTUs of heat per pound, while wood provides about 6,500 BTUs per pound. Oven temperatures in a coal fired oven exceed 900 degrees imparting a characteristic char to the crust. In addition the higher heat lets the crust get crispier.

Juliana's Pizza -- 19 Old Fulton Street Brooklyn, NY 11201 --(718) 596-6700
Trip Advisor gives this restaurant top billing -- Best Pizza in America. -Juliana's has a history with being associated with Grimaldi-..."Juliana’s, a New York-style pizzeria. Juliana’s heralds the return of Patsy & Carol Grimaldi—not only to the NYC restaurant scene, but to the original location under the Brooklyn Bridge where they founded Grimaldi’s Pizzeria"... See Zagat -26-Reviews

John's Pizzeria -- 278 Bleecker St (between Jones St & Morton St) New York, NY 10014 --(212) 243-1680
John's of Bleecker Street was founded in 1929 by John Sasso, and the restaurant is still in its original location. John's Pizzeria serve coal-fired, brick oven pizza, cooked in 850-degree ovens. John Sasso was one of the original bakers at Lombardi's. The walls are all carved out, and while the pizza is Ok, the place seems more about who you are with than about the pizza.
John's website and menu -- Zagat 23 --see Zagat Reviews 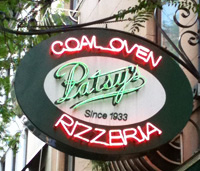 A comparison of Gayot and Zagat Guide